I haven’t done this in a while but today is WIAW, and I am taking part in the delicious food-fest over at Jenn’s adorable blog, Pea’s and Crayons! Thanks for hosting Jenn :)!

For breakfast I felt like trying something new so I made (never home) maker’s hearty pecan chip micro muffin! But instead of pecans I used dried cranberries and instead of whole wheat flour I made it gluten free and used brown rice flour and gluten free oats (I’m not gluten free but my roommate/bff is and I wanted her to be able to try it out too!).

It was delicious, but I made the mistake of adding too much stevia to the peanut sauce so it was like sweetness overload and for some reason I just can’t handle overly sweet things in the morning. I think next time I’ll make the muffin with pecans and dried cranberries or add less chocolate chips!

In between classes, I snacked on a pink lady apple but forgot to take a picture. You guys are really missing out..what an interesting picture that would have been 😉 but it was crunchy and delish!

After a cardio chisel and spin class today I was starvinnn! Don’t get in between me and the refrigerator…you’ll get hurt hehe.

I sauteed some mushrooms in coconut oil, added 3 scrambled egg whites and some herbs de provence! I laid that mixture on a bed of spinach on top of a La Tortilla Factory Smart and Delicious tortilla and chopped up red bell pepper, a low sodium slice of turkey from TJ’s and feta. Loooooved it.

Snack time. These are literally too good to be true. I am obsessed. I want to try out every flavor! Or find out a way to make my own because there’s no way I can afford having one a day haha! #poorcollegehealthnutproblems

My roommate, Elana’s mom signed us up to get a box of all organic veggies from local farms delivered to our doorstep. The goods showed up this week! But unfortunately I was too excited I forgot to snap a picture! A big thank you to Nina for getting this for us!!!! 🙂 The lettuce, onion and red bell pepper in the lettuce wraps were from the box. If you’re interested in participating in this and supporting your local farmers visit the website itsorganicdelivery.com for more info!! A couple strange looking radish/parsnip looking things were in the box as well as a vegetable called Kohlrabi. We’re not sure what to do with that yet!

To make the lettuce wraps we sauteed half a white onion with two cloves of garlic in about one tablespoon sesame oil. Then we added in chopped bell pepper (about a half of one), one grated carrot, celery, and one package & a half of TJ’s baked tofu. Bragg’s liquid aminos was used to give it some more flava! I whipped up some dipping sauce with one heaping tablespoon of raw almond butter, about 2 tablespoons liquid aminos, the juice of half a lime, one tablespoon agave, and a little bit of ground chia seeds to thicken it out.

topped with some peanuts for crunch and a squeeze of lime!

This dinner was sooo easy and delicious. Plus it’s pretty low calorie, gluten free and is filling! Elana and I were proud of ourselves and we even made enough for leftovers :).

I needed a little something sweet to end the day off right so I made some hot chocolate!

would you like some almond milk with that cocoa powder?!

Although, I accidentally dumped too much cocoa powder into my mug so it was more like clumps of cocoa powder floating in almond milk. Yuck. I had to doctor it up a bit, add some water to thin it out and stir it a ton for it to finally be drinkable! I didn’t take a picture of the final product though…ugh! I added a few drops of liquid stevia and cinnamon and it was delicious end to my night of studying!

Hope you guys had a fabulous day! I hope it’s sunny tomorrow here so I can go for a nice run outside!! 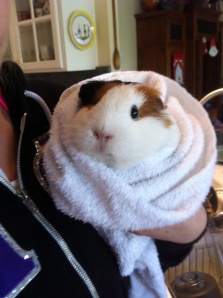 I get to see Lily again this weekend! Soo excited.